“Momentum”
a solo exhibition by Alexandre Farto aka Vhils

Vhils Studio and Danysz gallery are happy to announce Vhils’ return to Paris for his 6th solo exhibition with the gallery.

In his new plastic research, Vhils is breaking new ground around the concepts of light and matter. Like floating elements, the details of his works reveal a tension between a humanistic view and the harsh reality of the world that surrounds us. Through their frozen aspect, as though they were congealed in space and time, these new works are teeming with strong emotions. From these layers of meaning superimposed on top of each other in each of the works, whether mural or sculptural pieces, a great sense of poetry filters through, one that opens up and enriches the plastic vocabulary of the artist.

For this new Parisian exhibition, he is pushing his sculptural research initiated at the start of the year at the Cincinnati Contemporary Arts Center even further and experimenting with new techniques to create grandiose three-dimensional works – in epoxy, laser-engraved acrylic, or even a fascinating light installation. Within the bright and elegant gallery space, Vhils ventures freely into new installation concepts. The parquet flooring brings out the transparency of the works. We walk around, have fun observing them from the side or from above, and dive into the depth of their multiple layers. 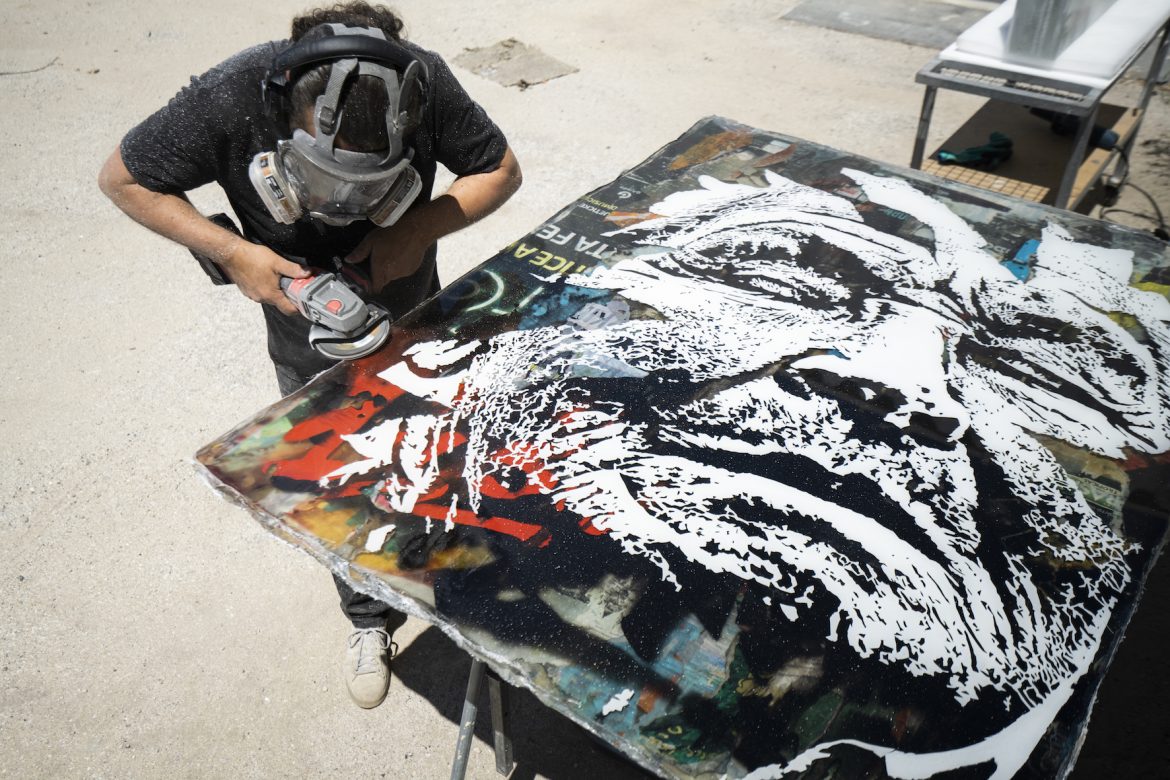 “This exhibition intends to present the beginning of a new cycle of reflection in my work. One whose focus falls on the idea of fossilisation – of capturing various symbolic material elements from our present-day culture in order to preserve them for the future as a fossil-like memory of the current times.

This act of crystallising, of preserving these fragments seeks to foster reflection on this phase of transition we are living through, where everything has been brought into question, where more than ever the fragilities of our way of life have been starkly brought into evidence – an opportunity to seek new directions and new solutions to the critical issues we face in our global societies but which can also be also fettered by the hegemony of the dominant model of development that has been shaping the world, by its power to reinvent itself, to readapt and endure. Will we be able to overcome these challenges and give shape to a new, reflected direction for humanity, or will the desire for real change be stymied and absorbed back into the previously existing state of affairs?

I’ve been exploring the idea of capturing something of the essence of our material culture in my work over the years, to somehow slow down the frantic pace that has been driving us forward by capturing and freezing snippets of everyday life and presenting them in a neutral setting to stimulate thought. To a certain degree, I’ve been trying to suspend time – but now the entire world has come into suspension due to the ongoing pandemic. What will this suspension mean to us? What will its consequences be for us and the planet? How will these fossils I’ve helped preserve here be seen in the near future? Will they be viewed as mere banalities of this troubled present, or will they be held as a significant testimony, meaningful records of a different time, a different way of life?

With this new direction comes a new series of bodies of works that address these issues. Despite resorting to many of the same media I’ve been working with over the years – mostly in the form of reclaimed discarded materials that speak of the sustainable management of our planet’s limited resources –, I’ve approached all of them from a different angle. Most of these explore and play with the concepts of light, perspectival interpretation, abstraction, and suspension.”